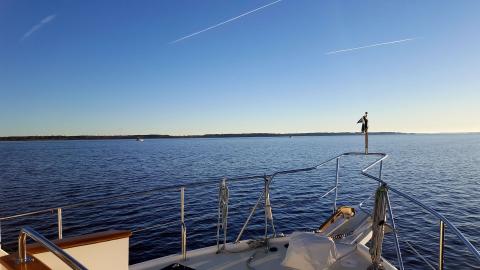 After departing New Bern, we then proceeded to Mile Hammock Bay. This is an anchorage that lies next to Marine Corps Base Camp Lejeune and is a good stopover point before continuing down the ICW. Unfortunately, we arrived after sunset as in it was pitch black and after some difficulty entering the channel, note to self, the red markers are on the right, we then proceeded to raft up with our other two companions. Once we were all tied together we started to prepare in earnest for New Year’s Eve. Betsy had prepared a beautiful Pork roast with sour kraut, sausages, along with some vegetables and bread. The rest of us were providing the adult beverages and we were all to meet on our boat for dinner. Now one of the dangers when you raft up is that not each boat will have their side access at the same point as yours. After much maneuvering with lines and such we had what we thought was a good way to cross between boats, but we hadn’t accounted for the human factor. As the party was making their way across to our boat, he who shall remain nameless, disregarded, his wife’s advice and attempted to pass a foil tray containing our dinner between our two boats. The foil tray twisted and we all watched in disbelief as Mile Hammock ate our entire dinner. I’m pretty sure we saw some of those sausages later floating down the ICW. Not all was a total loss as between the three boats we gathered some food and after a couple of drinks were laughing about it. Soon it was time for bed since we had an early start the next morning.